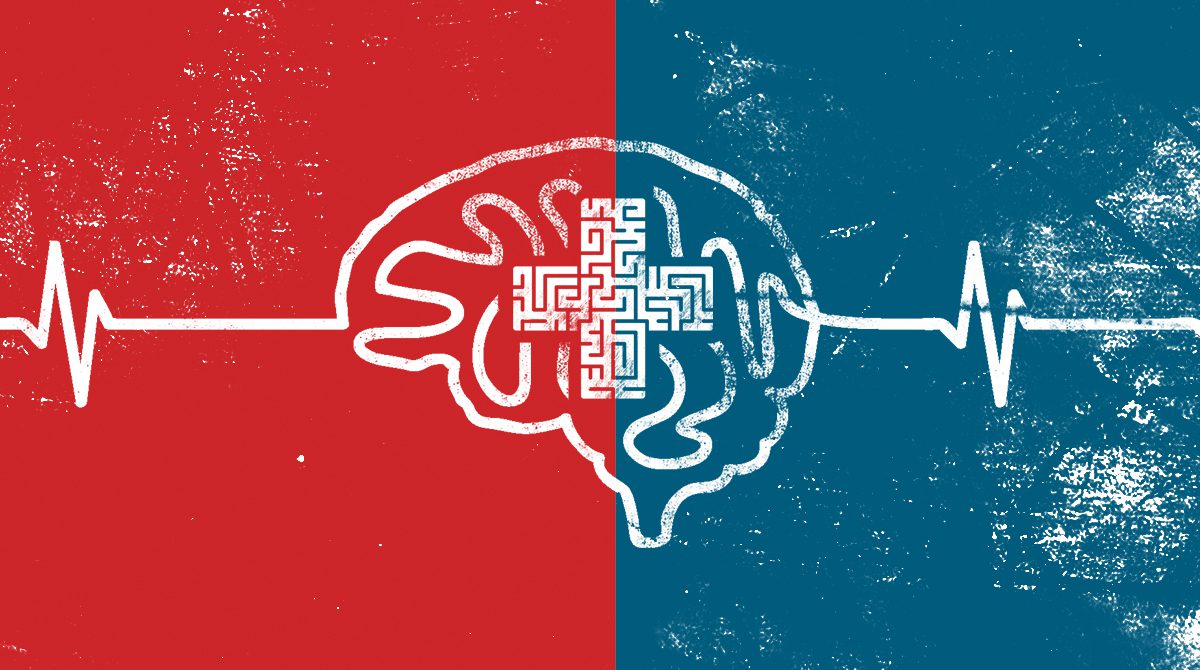 Mental health is having a moment. An elevated media focus, combined with increased access to services and testimonials from the celebrity pulpit have catapulted mental health into the harsh spotlight of public opinion, forcing Americans to confront a topic which, not long ago, only lived in the shadows.

The idea of self-care has joined the millennial lexicon, with phrases such as “treat yo’ self” prevalent across social media. But while the social platforms themselves seem to offer increased access to relationships, the shallow connections and often manicured photos can have the opposite effect, leaving users with feelings of inadequacy and loneliness.

“In high school, we are taught to compare ourselves to others. That’s how we survive,” says Drury junior Stevie Leigh, a strategic communications major. “College freshmen are still very much in that place of insecurity and it can be a rough start.”

What does happiness on a college campus look like? Results may vary, but experts agree on one thing – it’s directly related to a student’s mental health.

“Anxiety is king of the hill among college students, but depression is a close second,” says Derr. “Students and parents spend a lot of money on college and there is a lot of pressure to do well. Students want to make sure they are doing all they can to make the most of that investment.”

Derr says millennials and the incoming Generation Z face problems not previously thought about, such as a lack of personal independence and poor interpersonal skills.

“Many students are unprepared because their parents have been so involved in their lives. They were scheduled to the hilt,” he says. “Now, they have to find their own way without always looking to their parents for answers. It can be a struggle.”

When interacting with others, having 1,000 Instagram followers is different than talking to people in real life, says Jennifer Stewart, director of orientation and new student programs for Drury. Stewart has observed students nervous to even talk with professors.

“Those basic social skills of the past are gone,” she says, noting such skills as answering a phone. “Why would they? They prefer texting in every situation.

“But that tech-based world does not lead to a sense of fulfillment. During the freshman midterm check, the kids I see at a 2.0 GPA or below are the kids whose biggest struggle is the social aspect.”

“Student issues have evolved over the past 15 years,” he says. “It used to be they were homesick or had roommate conflicts. Now, they’re opening up about serious issues.”

Recently, Drury partnered with Burrell Behavioral Health to expand mental health services on campus, adding a behavioral health consultant in the Panther Clinic for up to 20 hours per week. Students also have access to up to five visits per year with mental health professionals through the Burrell system at no additional cost.

In addition, more Drury students than ever are starting off on the right foot thanks to a new approach from Stewart and her team dedicated to connecting students in meaningful ways during orientation and their first few days on campus.

Stewart and team changed up their approach to meet students where they are, pulling students in, rather than waiting for students to seek them out. During events like Freshman First Day in June, students are assigned a grad student who can reach out to them on various platforms.

“Students connecting with each other is the best connection,” she says, noting inclusion is everything on a college campus.

More than just a sports team or Greek brotherhood, inclusion is what keeps isolation away.

“When you’re happy or excited, you can share that on social and people are happy for you, but if you’re lonely you can’t reach out and hold someone’s hand via Facebook,” she says.

As a resident advisor for the past two years, junior Leigh is always open to talk with her fellow students and often speaks about the services available on campus.

“There is a general sense on campus that your mental health is part of your overall health,” she says, mentioning professors often include counseling service information on class syllabi. “It’s part of taking care of yourself. You go to the doctor each year for general maintenance. Why wouldn’t you have a mental health check as well?”

This fall, students will also have access to the Robert and Mary Cox Compass Center, which among other academic mentors, will provide a life coach helping with everything from mental health to financial planning.

However, Leigh admits the idea of self-care still has negative connotations among older generations and is often misused as an excuse to indulge.

“You can’t eat ice cream every night and just say ‘treat yo’ self,’” she says. “Self-care is about those things that really make you feel better, that really have a mental effect on you.

“Self-care is personal, it’s not something you post on Instagram with a hashtag. The most genuine self-care is the kind nobody knows about. That kind that makes you most happy.”

Leigh notes mental illness is not a personal failure, it happens to most people at one time or another in life, it’s how you deal with it that defines your happiness.

“Selves are created, not discovered. It’s a process you work on your whole life,” she says. “The relationship you have with yourself is the most important relationship in your life. It’s your foundation for happiness.”

Need a moment to just breathe? Drury University has a dozen serene spaces scattered throughout campus. These quiet environments are meant to calm the mind and relieve stress. So, take a moment and decompress at one of the following:

When Drury University professor Traci Sooter introduced her Design-Build students to their Eden Village project last fall, she knew they would build a beautiful home, but she didn’t know they would also make the connection of a lifetime.

A tiny-home community on Springfield’s east side, Eden Village is the first all-inclusive program in Springfield that addresses the needs of the chronically disabled homeless.

“Eden Village does not want to just provide adequate housing for the disabled homeless, we want to establish a sense of community,” the website reads. “The emphasis needs to be on dignity, love, respect, abundance and acceptance.”

Like a college campus community, a sense of inclusion is key for the formerly homeless in Eden Village. That sense of community is a mental shift for a population who often felt nobody cared about them.

“Mel was 22 at the time and deaf. He aged out of the foster care system and lived on the streets for five years before Eden Village,” Sooter says. “He was lost in plain sight. He had fallen through the cracks.”

Sooter’s students sat down with Mel, interviewing him to learn his wants and needs for the house. That’s when Sooter said everything clicked.

“It was eye-opening for them. Here is this creative, smart man who is their age and the only difference between them was that of circumstance,” she says. “In the same five years he was on the street, they will have earned a degree.”

Sooter says not only was the experience life changing for her students, but it also helped them better understand designing for the needs of the client.

“They are more sensitive designers. They realize, for example, someone who is deaf needs clear visual space, no blind corners,” she says.

Moving in a few days before Christmas, Mel’s tiny home is one of 30 in the Eden Village community, a space where Sooter says he finally found the family he was missing. 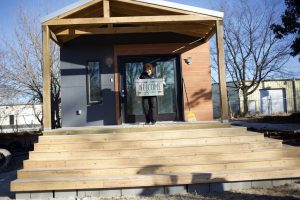 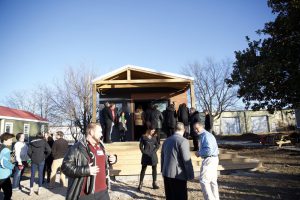 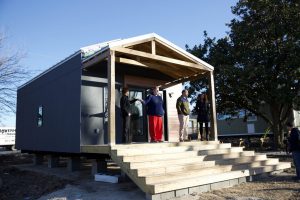 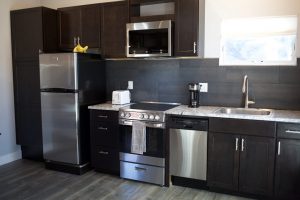 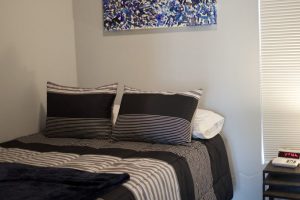 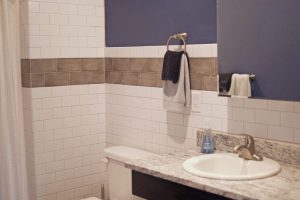 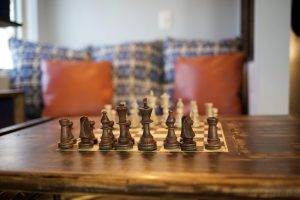 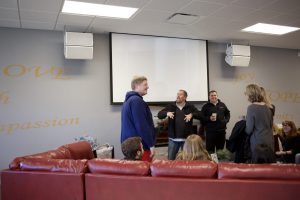 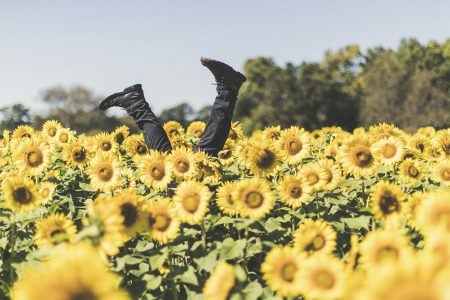 A liberal arts education is deeply rooted in the freedom to engage in meaningful, life-changing conversation and debate.... 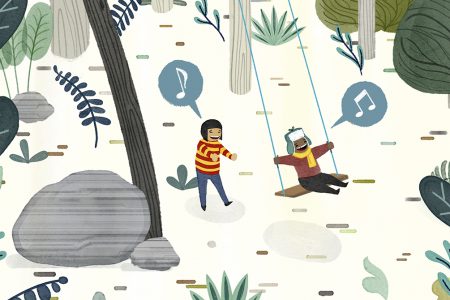 By Emma Wheat '15 "Music gives a soul to the universe, wings to the mind, flight to the imagination and life to everyth...